All Perils Auto Coverage: What is it? Do I need it?

While shopping around for a car insurance policy, you may have noticed the term “all perils coverage.” It’s one of the coverage types you can choose from, but what does it cover? Should you get all perils insurance, or is it better to get a different kind of policy? Read on to find out more about this coverage type.

What Is All Perils Coverage?

All perils coverage, a.k.a. an all-risk policy, covers all risks to your car except for those explicitly excluded in your policy. It’s considered the broadest form of car insurance coverage. Because of its extensive protection, it’s typically more expensive than other car insurance policies.

While mandatory car insurance is a legal requirement to drive in Canada, all perils coverage is optional in most provinces. However, if you lease or finance a car, some financial institutions may require you to get this form of car insurance.

Other Types of Car Insurance Coverage

Some providers may describe all perils coverage as a combination of collision and comprehensive insurance. But what are these types of coverage, and are there other types that protect your car from different risks? Read our simple summaries of the different types of car insurance coverage below.

Also known as upset coverage, this type of insurance policy protects your car only from specifically-named risks, such as fire or hailstorms. Other perils specifically named in this type of policy include lightning, theft, and windstorms. If a risk is not explicitly named in your specified perils policy, it isn’t covered, and you won’t be entitled to a claim.

Even the best drivers may get into a collision, so every car owner should be prepared for an accident. Collision insurance covers your car in case of a collision with another car or object.

Comprehensive insurance covers all risks that require repair or replacement except for a collision or upset. Simply put, this protects your car from damage caused by things outside your control, such as attempted theft, fire, or vandalism.

What Kind of Insurance Coverage Is Required To Drive in Canada?

The following forms of insurance coverage are mandatory for driving in all Canadian provinces:

Some provinces may require additional coverage on top of these mandatory forms of insurance. Additionally, some provinces provide insurance solely through private insurers, while others such as British Columbia have a hybrid insurance system.

What Perils Are Covered By All Perils Insurance?

The following perils are typically covered by all perils insurance:

Note that the following risks are typically excluded by all perils coverage: 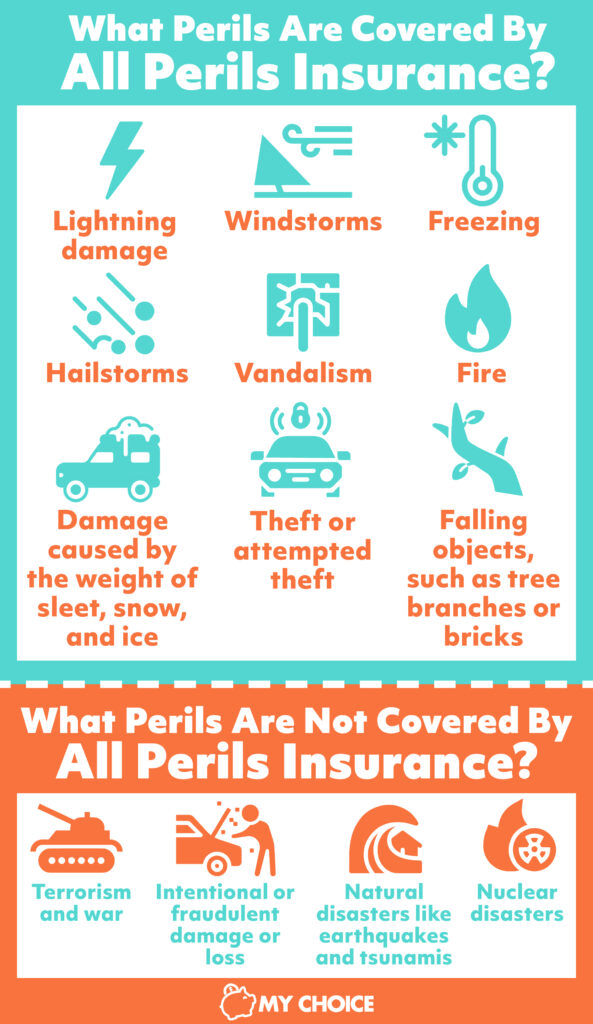 Is A Peril Different From A Risk?

Yes. A peril refers to the cause of the damage or loss, while a risk refers to the chance of sustaining a loss or damage due to a peril. However, note that insurance companies use these terms interchangeably.

How Much Is All Perils Coverage?

Because all perils coverage is so extensive, it will cost more than other forms of car insurance. However, the final estimate for your premium will depend on other factors, such as your driving history, the car being insured, and your insurer.

Insurers provide different quotes depending on these factors, so don’t forget to compare quotes before taking out a car insurance policy. This will help you choose the best option for your car needs and budget.

Should I Get All Perils Insurance?

Getting all perils insurance coverage can give you peace of mind as it covers most risks that would damage your car. However, it’s more expensive than other car insurance coverage types, so you may opt for less coverage to lower your insurance premiums. Ultimately, getting this kind of coverage depends on how much risk you’re willing to tolerate.

Whether you get all perils insurance or a different car insurance coverage, it’s important to shop around to get the best deal. You can use the comparison tool here on My Choice to see how much all risks coverage would cost from different insurance companies.