What the MOMS Act Means for Ontario Drivers 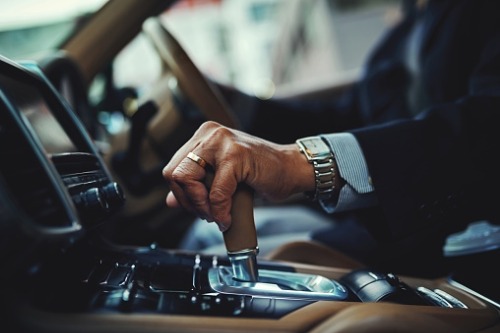 The Minister of Transportation for Ontario, Caroline Mulroney mentioned in a news release that “Driving is a privilege and those who threaten the safety of others have no place on our roads.” Under this, drivers will now face a longer licence suspension and vehicle impoundment. Your car insurance rates in Ontario can be impacted by accidents and traffic violations such as this.

What is the MOMS Act?

Several statistics pointed towards unethical road usage. In Ontario, licence suspensions relating to street racing and stunt driving have increased by 130% between 2013 and 2019, and have risen by an additional 52% during the COVID-19 pandemic between March and August 2020, in comparison to the same period in 2019. According to Mayor John Tory, the City of Toronto has also seen a “dramatic and troubling” rise in high-risk driving since the start of the COVID-19 pandemic. Between January 2021 to the end of May, Toronto alone saw a 90% jump in stunt driving and racing charges compared to the same period in 2019, with over 276 tickets nearly 130 more than in 2019 issued.

The MOMS Act or the Moving Ontarians More Safely Act was created to prevent this and calls for a more severe crackdown on stunt driving, improved commercial-truck safety, protection for cyclists and road workers, and strengthening provincial oversight of the towing industry.

The legislation reduced the speed threshold for stunt driving charges. For roads where the speed limit is less than 80 km/h, the threshold decreased from 50 kmph to 40 kmph. For a highway not within a local municipality or a built-up area, the act establishes a default speed limit of 80 kmph.

The act also features other safety measures such as using cameras in streetcars to photograph drivers who illegally pass, requirements for a police report and charges if applicable, for drivers who open their doors and hit cyclists and introduced new standards for e-bikes, which will be now be classified under bicycle-style, mopeds, or motorcycle-style. 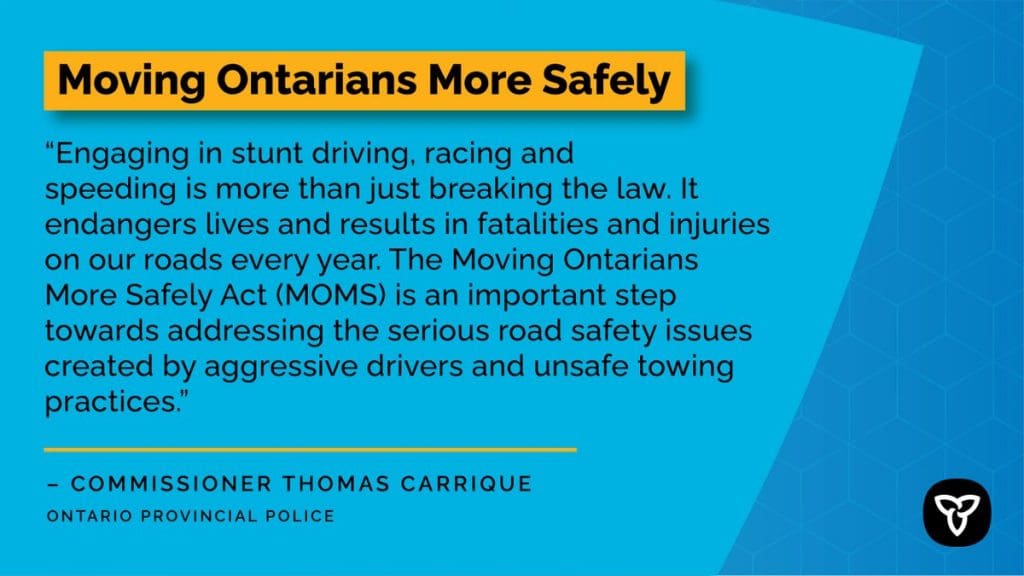 Roadworkers will be protected by authorizing MTO Transportation Enforcement Officers to close a road, drive along closed roads and direct traffic as part of their duties when responding to emergencies or assisting in collision investigations. It will also permit the use of “Automated Flagger Assistance Devices” or automated traffic control devices and permit vehicles used in highway construction to back up on a divided highway in safety.

To improve truck safety, the Act introduced additional tools to maintain the hours-of-service rules and created the Towing and Storage Safety and Enforcement Act, 2021, (TSSEA) that requires tow operators, tow truck drivers and vehicle storage operators to be certified under this. It will also set standards for customer protection and roadside behaviours, establish penalties for non-compliance, and appoint authorities to provide oversight.

What Does it Mean for Your Car Insurance?

Kim Donaldson, the Vice-President of Insurance Bureau of Canada (IBC), Ontario issued this statement after the act was passed, “IBC commends the government and members of the Ontario Legislature that helped pass this legislation in record time. The MOMS Act will make roads and highways safer for drivers and tackle the rampant fraud that has driven up their auto insurance rates.”

This means that partaking in stunt driving not only will put your car at the risk of collision and associated charges, but will also raise your insurance rates if you’re convicted under this Act. Moreover, you may even face a license suspension or vehicle impoundment. Obtaining car insurance in Toronto can be tricky after this conviction. However, with our insurance tool below, you can save money on your insurance across top providers. You can also lower your insurance premiums by